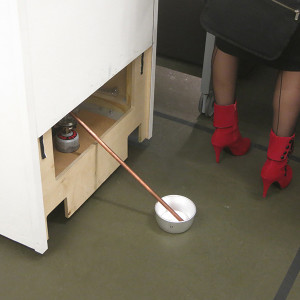 The parasite is a being and non-being at the same time, relation and non-relation. It is nothing on itself, and it is untraceable to no one. It is traceable to No-one. There is a beast in here. A collective, we leave in. Just as the disintegration starts, the strong drive to preserve the shape intact follows. It is this panic to stay fit of the self that struggles. It is only that sense of the self that will collapse. Disintegration helps to inhabit the relationships.

The actor disintegrates in the act. Inhabits partial relationships. A minor being able to inhabit the productive relation of the major beings. It is a being that lives and eats on the side of them.

Do you know depression? It is like a structure keeping your self together. Your memory goes off. Concentration skills get messed up. So you need to keep the self together. It is difficult to connect with people. You loose interest. There is no energy to get to know new ones. Difficult to meet with those you like. Driving away those you love. You don’t want them to pity you. You were self-pitying. You need to keep it for your self. It is like a dinner. The salad is served… Do you know what is the simplest way to turn public property to a private one? Just spit into the salad bowl. Only that you are the bowl. Self-spitting – it gives an integrity.

There is a beast. A collective, we live in. Its scream for more food and more becomings, more production.

Can a minor being able to inhabit the productive relation of the major beings? Can it live and eat on the side? Imagine it can form itself according to the place taken, and available resources. It is can also host the other on the body or trunk. It can share a constitution, and it could be itself about s conflicted realisations sharing constitutions. And it is not you and not I, more of noise that is between us when we talk. Something more than said and heard. More like all the misunderstandings. More like all our clumsiness combined. The anti-beast. The collective of dysfunctional. The parasite on the production.